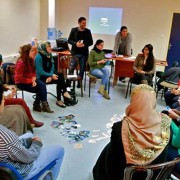 The Counseling Office at the Birzeit University Deanship of Student Affairs, in cooperation with the Jerusalem Autistic Child Care Organization (JACCO), held on December 9, 2014 a workshop on children with autism and the mechanisms for coping with the disorder. JACCO’s director, Khalil Jaradat, and social advisor Samia Hawamdeh participated.

Jaradat said that JACCO as a youth organization originated as a result of the lack of specialists in autism in Palestine, defining autism as a disorder in the brain and nervous system that appears in early childhood and affects all aspects of their lives. Jaradat added that the basic problem faced by autistic children is communication and interaction, noting that there are five types of autism that are difficult to distinguish between.

Social advisor Samia Hawamdeh said how important it is that parents are made aware of the disease, paying attention to their children in their first three years of age. Hawamdeh said that diagnosing autism at an early age opens the way to benefiting from therapeutic options that can help a person live with autism. According to 2010 statistics, the incidence rate of autistic males to females is 4:1.

This workshop is part of a series of workshops organized by the Counseling Office at the Deanship of Student Affairs Office to promote students’ awareness and understanding of these diseases and the role of community-based institutions in addressing them.